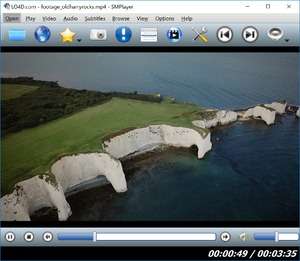 A review of SMPlayer by Tina de Pierre

SMPlayer is a versatile media player which takes on the task of playing media files, a backend for MPlayer.

The extreme versatility of this media player makes it an all-in-one tool which pretty much negates the need for anything else on a desktop. SMPlayer not only plays virtually all video and audio file formats, but also supports the playback of Blu-ray and DVD discs.

SMPlayer is able to playback videos without the need for external filters; It even supports karaoke files (if you have CDG files to feed it). If you're watching a film in a foreign language, finding subtitle files is a piece of cake.

Further video functionality here includes modifying the video in ways such as video size, zoom, aspect ratio, etc. Mirroring, flipping and rotating the images being played are also among its features.

In addition to watching local media, SMPlayer also provides a search functionality which supports YouTube with its built-in viewer. The player can stream Internet radio too.

Overall, a versatile and useful program which YouTube users might find rather handy. Its faithful community of users have fueled the rise of this lovely media player and array of functionality is certainly impressive.

This download is licensed as freeware for the Windows (32-bit and 64-bit) operating system on a laptop or desktop PC from video players without restrictions. SMPlayer 20.6.0.0 is available to all software users as a free download for Windows 10 PCs but also without a hitch on Windows 7 and Windows 8.

Compatibility with this AVI player software may vary, but will generally run fine under Microsoft Windows 10, Windows 8, Windows 8.1, Windows 7, Windows Vista and Windows XP on either a 32-bit or 64-bit setup. A separate x64 version of SMPlayer may be available from SMPlayer.

The program was created by the developer as a freeware product, but donations for the continued development are highly appreciated. You may generally make a donation via the developer's main web site.

Ranking in
Video Player Software
#11 of 59